Additional lighting was one of the first things I added to the FJR, a pair ofLR4’s from LEDRider.com  Their compact and extremely bright floods that live on the forks down around the fender.  They do a very good job of throwing a lot of light in front of me.  I do need to put some more focused light further down the road though.  Thanks to Justin for a good deal on a pair of LR64’s which require a custom bracket to put them up high (in front of the mirrors.)

Are you brave enough? If you’re the kind of guy that would stick a 2.5 Lb HID on your bike, then this is the light for you. These lights are 4 inches square, and weigh in at 2 Lbs each. 4 huge reflectors focus the 3400 Lumens into a far reaching spot beam. 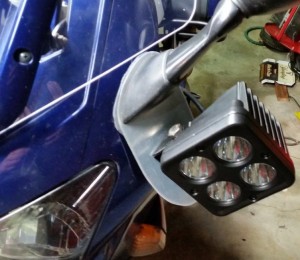 I’m treating this as version 1, especially since the only stock I had access to was some .040″ aluminum from my buddy’s garage.  I expect the vibration from 2 pound blocks of aluminum will need substantially more thickness in the end.  Using a template cut from thin cardboard, we made a couple of blanks, cut out the three mounting holes and the fit looks pretty good.  I need to get these on and working for the rally this weekend, so they’re not as tight to the mirror stalks as planned.  In a few weeks I’ll work on version 2 stiffer and more “up and forward than out and to the sides.”

I threaded a couple of 4mm power jacks into the upper dash panels to make adding or removing these (or any other aux lights) a snap. 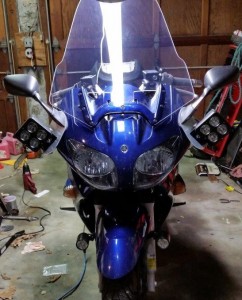 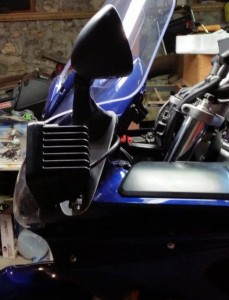 Update: (April 27, 2015) I was right about the .040 thick aluminum being too thin.  The vibration was obvious.  Also, in my rush to get this ready for the Cape Fear rally, I missed an electrical problem on the right side and seem to have leaked potting epoxy into the dimmer for these.  More soon.